Son of the Bride of Gootis
needs your help. Click below.

﻿﻿﻿PART IV IN THE SERIES
A FILM BY TOM MILLER

YOUR SMALL DONATION WILL HELP
US COMPLETE THIS NEW ART FILM!
﻿﻿﻿ 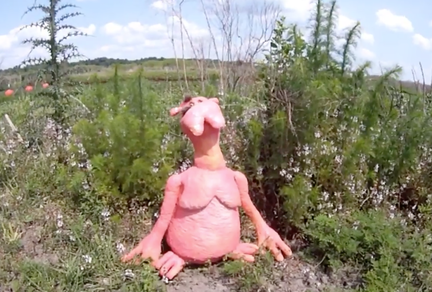 Shooting resumes in the next two weeks 2019 to complete the movie. After numerous delays based upon finance, script-rewrites, and cast scheduling, FREDInk Records can now announce that the movie WILL be completed by December of 2019. All issues are resolved and the crew is now passionately working together as a team to bring this American story to renegade theaters throughout the Western hemisphere. FUNDS are the single most tool which will help us to realize the dream. You will be a part of a great work of art by contributing today to our production. Keep an eye here on the official SOBOG page for new announcements, updates, and special features.

OTHER PREVIEWS ARE AT THE BOTTOM OF THIS PAGE!

SON OF THE BRIDE OF GOOTIS
PRODUCTION HISTORY

SCROLL DOWN FOR THE MORE RECENT INFORMATION
PREVIEWS AT THE BOTTOM!

This page is dedicated to chronicling the process making "The Son of the Bride of Gootis" - a Tom Miller VideoFilm.

STAY TUNED FOR PICTURES, VIDEOS, COMMENTARY, AND MORE!
The Making of the Son of the Bride of Gootis!


The News is Fucked

PRODUCTION MEETING EXCERPT FOR SON OF THE BRIDE OF GOOTIS

Talked about raising another $200 for our SOBOG puppet. Went over script. Talked about possibly adding Dan Khan to the cast if he's willing. Discussed the back-story of the first character the Son of the Bride of Gootis encounters: The Fookin' Loon [George O'Brien]. Discussed locations including an abandoned boathouse on one of our sponsor's properties. Picked out 'eyes' for the SOBOG puppet. 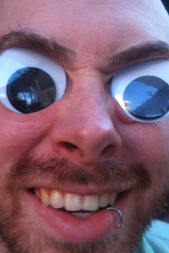 Daniel T. Ballard, Professional Puppeteer, Fabrication -
Operating the Son of the Bride of Gootis Puppet.
The EYES are the windows to the soul. Director Tom Miller wanted eyes that projected a kind of human element, but eyes that can have many emotions read into them. They needed to be at once sad, enthusiastic, hopeful, wondering, pleading, desperate, and determined. Miller has said he wants much of the movie to be a blank slate onto which people can imprint their own experiences, emotions, and sensibilities. 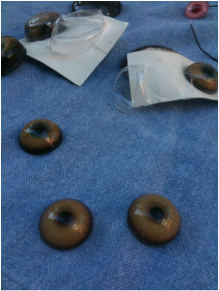 NOON - 5PM : Tom Miller continues updating and writing on the screenplay. Adds the Dream Sequence, with the Boat Cap'n, Johnny Dee, passing across the River Styx, the two Thugs Miller & Spence return, and fine-tunes the NARRATOR lines. Tom Miller sells his entire DVD collection to help raise funds, which is purchased by Stacey St. Edmunds for an undisclosed amount, effectively making her a De-facto associate producer.

Meanwhile, Daniel T. Ballard adds feet and ear thingies to the Son of the Bride of Gootis Puppet!

After a series of delays, SOBOG begins principle shooting on Feb. 9, 2013 - The River Shoot!

Report of 2/6/13: / Held back by financial setbacks, schedule conflicts, and unforeseen circumstances, principle shooting is now scheduled to begin on the Ichetucknee River on Saturday, Feb. 9, 2013. Our good friend, Alex Davidowski has generously contributed a High Definition Sports Camera [the thing goes underwater!!!] to our cause and we will be using that camera primarily for all the nature/water shots of the Son of the Bride of Gootis. Following the river shoot, we plan to begin knocking out the musical numbers, one-by-one: The Lincoln I [Spagandy] shoot, the Lincoln II [James Wesson] shoot, and then back to the river for the Lincoln III [Dan Khan] shoot. Dan is leaving Gainesville in the near future for Washington D.C., so we need to put his scene in the bag before he goes.

SOBOG SAYS, "When are we shooting?" 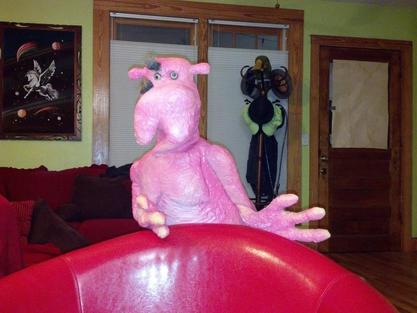 Photo by Tim O'Brien
Finally, shooting is to commence the week of July 25th! We are still raising funds, but all is a go. The expected release date is now October 5, 2013 (Tom Miller's Birthday). The latest Teaser/Trailer for the VideoFilm can be seen here: TRAILER!

SON OF THE BRIDE OF GOOTIS DELAYED AGAIN...